OMAHA — October 8, 2018 — Matthew Lovegood is often praised for his work as a dancer, choreographer, and ballet master.  Each season, he juggles these roles, often wearing all three hats at once.

American Midwest Ballet’s upcoming Momentum: Rhapsody in Blue proves to be no exception as Lovegood dances in four of the six works, runs Momentum rehearsals as well as company and youth rehearsals for The Nutcracker, and brings his original work, French Songs, back to stage with a new generation of dancers.

And along the way, Lovegood managed to squeeze in a wedding (his own!) this weekend, plus made time to tell us about French Songs, a tender, sentimental classical ballet set to the music Chants d’Auvergne, an arrangement of folk songs for orchestra and voice.

What is special to you about French Songs?
French Songs premiered years ago at Omaha Theatre Ballet with Sarah Maloney (currently AMB’s Development Director) and Adam Schnell (Artistic Director/CEO of Ballet Vero Beach) as the lead dancers.

When I was creating the ballet, Sarah had just become engaged to be married. This is referenced in her solo, where you can see some gestures referencing her beautiful ring and happiness.

Adam’s solo included several steps that are not often performed by male dancers, such as gargouillade in which the dancer jumps into the air and makes circles in opposing directions with their feet.  Adam was adept at these steps, but it made for a difficult solo!

I also included steps I had seen as a child and loved very much, such as in the dance featuring the female soloist in which she claps her hands along with the other ladies while in classical positions, a vignette I had seen in 1989 and wanted to use on stage ever since.

Tell us a bit about the your journey from being a young dancer to some of the experiences that led you to where you are right now.
It’s widely known that I am the elder statesman of AMB right now, and was plucked out of a brief retirement from dancing by Erika Overturff to work with the company.

I realize that this extra time on stage — and with these dancers —  is a gift that few are granted. I try to be present in every moment and soak it all in, whether it be our daily barre work, joking with fellow dancers in between rehearsals, or diving in to a character during a performance.

I used to be soaked with sweat before we were 10 minutes into class because I was so nervous about being correct. Now I know that there is only one person that I need to please and live up to in this difficult yet rewarding life we call ballet, and that’s me.

For many choreographers, the first inspiration for a new work comes from the music.  Is this true for you?
Most of the time, music is the inspiration for my choreography, but there are times when other subjects take the lead and I have to find music that will compliment the idea. French Songs is set to the music Chants d’Auvergne by composer Joseph Canteloube.

While music was the starting point for French Songs,  in the past, I’ve choreographed a ballet inspired by Cirque du Soleil, another inspired by three different song birds found in the wild, and was once commissioned to create a one-act story ballet based on the concept of a comic ballerina and a bowling champion!

How did you choose this piece of music?
When I was in New York City in 2006, I saw a concert that included Chants d’Auvergne. The Auvergne is a region of France known for its mountains and volcanoes, and the performance featured a backdrop depicting a volcano.  The music was sung live and featured lyrics depicting rustic, peasant life with themes varying from love and death to farm animals and the weather.

I chose to strip away the volcanoes and  pastoral themes and go in a completely different direction. The music is so beautiful that I think it still makes sense.  The two most famous portions of the score, Bailero, and Obal, din lou limouzi are included in this ballet.

Is there a story you are telling in French Songs?
There is no direct narrative for French Songs, but there is definitely an atmosphere that we hope is created for the audience.

What are the lead dancers pondering as they pause and gaze in to the distance? Are they longing for someone or remembering happy times?  Is the female soloist a friend or a former lover? The ballet is very romantic and hopefully comes across the footlights as though the audience is a voyeur in to an opulent, intimate gathering of people in Europe in the 1800s.

What style of dance do you use in this work?
French Songs mainly uses a classical ballet vocabulary; however, there are moments that incorporate character dance, particularly in the section we have nicknamed “the folk dance.”

The ballet can also be considered, in parts, a pastiche of early romantic ballet styles.

Who were some of your biggest influences and inspirations?
I was very much influenced by the choreography of one of my mentors as a young person, Sandra Little.  All of her works were rooted in jazz dance, but every single step always felt right with the music, and everything connected naturally for the dancer; never awkward.

Who inspires you today?
In the dance world, I enjoy the work of Justin Peck of New York City Ballet and internationally known choreographer Christopher Wheeldon. What I like is that their work is based on the classical vocabulary with a twist, and traditional structure and patterns can be seen.

It’s trendy right now to use a mish-mash of steps and tricks with no overall order for the movement on the stage, which I am not a big fan of.  I think I get my organized brain from one of my other mentors as a child, Sharon Filone. She would often choreograph to the rhythms of her car’s windshield wipers or other everyday happenings!

What motivates you on a Monday morning?
My role as ballet master of the company inspires me.  I enjoy working with the dancers on refining their technique, maximizing their potential, discovering ways to interpret choreography.

Since mind and body are so connected, I even enjoy listening if the dancers are going through a tough time or dealing with an injury. We’re all on this ballet journey as a family!

What is one thing about you that might surprise people?
I love action movies!  Racing, diving, rock climbing, spies and sharp shooters. I love it!

What else would you like to achieve in your career?
I’ve done so much – I’ve been very fortunate!  Some day, I would love to choreograph Carmina Burana with live musicians incorporated on the stage; and I have some cool ideas for a Scheherazade reboot.

Beyond that, I want to keep pushing the experience for our dancers to make AMB the most fulfilling place to be. 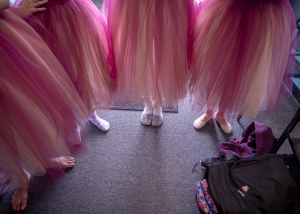 What is the best advice you’ve received?
Always be nice to the wardrobe department! They have the ability to make you uncomfortable or ridiculous on stage, or to make you feel at ease during a performance. A friend will always make sure you look good out there in costume!

What advice would you share with young dancers and choreographers starting their careers?
Sometimes you have to create your own opportunities!  I just curated a ballet performance with some of my peers in my hometown this past summer.  It was a ton of work, but I knew that if I wanted that experience, I would have to do it myself.

Get some of your dancer friends together and work for a couple of hours on a choreographic idea you’ve had. You never know where it’s going to lead