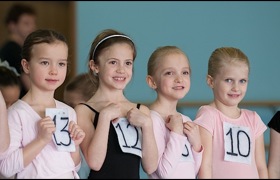 More than 80 adorable “fairies,” “elves” and “gnomes” turned out Sunday, March 6, to audition for youth roles in American Midwest Ballet’s upcoming production of Oskar Antunez’ A Midsummer Night’s Dream.
Casting decisions will be made this week, and those chosen will begin rehearsing in April for the May 21-22 production at the Rose Theater, artistic director Erika Overturff said.
Held at Motion 41 Dance, the audition evaluated young performers in three age groups: ages 6 through 8, ages 9 through 12, and age 13 and up. Each audition consisted of a series of exercises that gave the performers a chance to show off not only their dance abilities, but also their acting skills.
American Midwest Ballet professional dancers Bret Samson, Sasha York, and Angela Zolczynski pitched in to help Erika Overturff and ballet master Matthew Carter organize the auditions and demonstrate the dance combinations. Outside the audition room, members of the American Midwest Ballet Guild handled a variety of vital roles: greeting and registering the audition candidates as they arrived;  distributing and collection information forms; and measuring the candidates’ heights and clothing sizes for future use in costuming.
Tickets are available now for A Midsummer Night’s Dream, based on Shakespeare’s best-loved romantic comedy and created by internationally-recognized guest choreographer Oskar Antunez. Mr. Antunez performed extensively throughout the United States and Europe with companies including Les Grands Ballet Canadiens and the Harkness Ballet of New York before making his choreographic debut with the Royal Danish Ballet, gaining nationwide acclaim for his original works.
Gallery of photos from the audition:
[portfolio_slideshow exclude=”2476″]