OMAHA — April 23, 2015 — American Midwest Ballet presents the final work of its spectacular fifth season with Momentum: International Masters on May 1 at Joslyn Art Museum in Omaha and again on May 3 at The Arts Center in Council Bluffs.
“Momentum is all about showing a variety of works, and the International Masters program is an exceptional example of that,” said Erika Overturff, American Midwest Ballet’s founder and artistic director. “The three choreographers we highlight are groundbreakers and trend-setters. Their works demonstrate the range of what is possible in dance.” 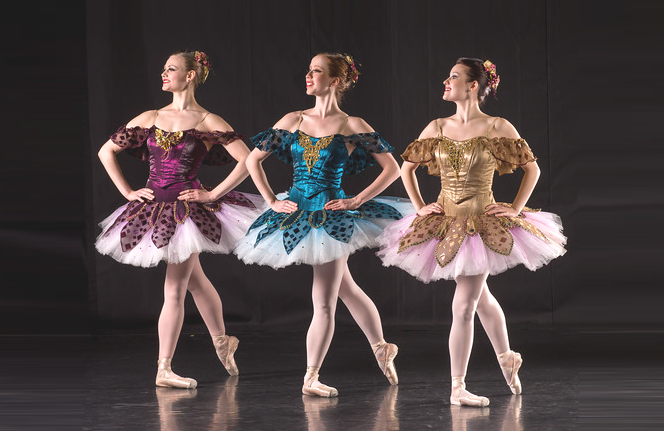 Three very different masterpieces, plus an audience favorite with a deliciously flirty ‘food’ theme, are on the program

Paquita   Originally created in 1846 for the Paris Opera Ballet, Paquita received an extensive makeover in 1881, when 19th-century master choreographer Marius Petipa restaged it for Russia’s Imperial Ballet of St. Petersburg. Petipa, a Frenchman, supplemented the original ballet with sparkling dances set to music written by Ludwig Minkus based on Petipa’s specifications. Though the original ballet is rarely performed, Petipa’s additions from 1881 were such brilliant examples of Imperial Russian style that they thrived throughout the years to form the Paquita we see today.
“This is a quintessential tutu ballet,” Overturff said. “It is a technical showpiece — very stylish and full of energy — and audiences love seeing it.”

Valse Fantaisie   This 1967 work by the legendary 20th-century choreographer George Balanchine is set to a lively waltz by Mikhail Glinka. The ballerinas, attended by a male dancer, move together in a whirl of perpetual motion.

“We are honored to be granted permission by the prestigious George Balanchine Trust to perform this ballet,” Overturff said. Paul Boos, Répétiteur for the Trust, called Valse Fantaisie “one of the top-five most aerobically difficult Balanchine pieces.”

On My Mother’s Side   Nebraska native and modern dance master, Charles Weidman, was a creative genius whose contributions to his artform continued nonstop until his death in 1975. Among his innovations was “kinetic pantomime,” a seamless blending of mime and dance movements. In 1939 he combined this technique with a piano score and spoken narration to create On My Mother’s Side, based on characters and incidents from his own family history. Although Weidman originally performed the work as a solo, subsequent stagings have expanded it to use multiple dancers, heightening the power of the movement.

“This is a very moving work that brings to life the personality and fate of real people,” Overturff said. “Weidman is one of the founders of modern dance and we are thrilled to be presenting this work in his home state.” On My Mother’s Side is presented in collaboration with Joslyn Art Musuem’s special exhibition American Moderns.
The Diner — For a change of pace, Overturff presents a re-staging of her own ballet, The Diner, a series of vignettes set to music with food-related themes. It is a fitting conclusion to American Midwest Ballet’s fifth anniversary season, she said, because it was the first piece American Midwest Ballet ever performed as a company — on a tour performance in Chicago in 2009, prior to  the company’s official debut at Orpheum Theater in Omaha in 2010.
“It’s a fun piece with a retro feel, and the dancers love performing it,” she said. “And it’s about food. Who doesn’t enjoy food?”

American Midwest Ballet performs Momentum: International Masters at 7:30 pm Friday, May 1, at Joslyn Art Museum, and 2 pm Sunday, May 3, at the Arts Center at Iowa Western Community College in Council Bluffs.
Tickets are on sale now.