American Midwest Ballet opened its premiere season in style Saturday night with its debut performance at Omaha’s Orpheum Theater. Omaha World-Herald correspondent Kim Carpenter’s review summed it this way: “The only disappointment was that the show was just a one-night run. No matter. American Midwest Ballet’s first season is off to a swinging start.” 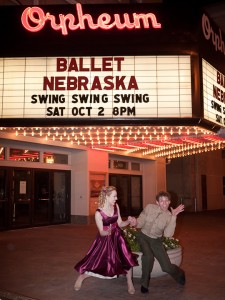 Presented with the support of the Iowa West Foundation, the Nebraska Arts Council, and the Nebraska Cultural Endowment, the opener drew an enthusiastic response from the Orpheum Theater crowd. Schoolchildren from the surrounding area were also loudly appreciative in two preview performances presented Thursday and Friday at the IWCC Arts Center in Council Bluffs.
American Midwest Ballet’s next Omaha-area performances will be in February, when the mixed-repertory program Momentumcomes to the IWCC Arts Center and Joslyn’s Witherspoon Concert Hall.
But there’s plenty of activity in the meantime, starting with auditions October 8 for the Aspen Santa Fe Ballet’s production of The Nutcracker, for which American Midwest Ballet is conducting rehearsals for local performers. And American Midwest Ballet will be staging its own Nutcrackerproduction December 17 and 18 at the Sami Bedell Center for the Performing Arts in Spirit Lake, Iowa.
Keep following balletnebraska.org for all the latest news from the region’s new professional dance company!